Posted at 10:18h in Blog by Tez Ferguson 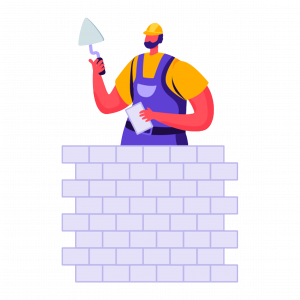 When it comes to brick laying, then chances are that you are going to think that things are relatively straight-forward and that there are only a few options open to you to think about. However, this really isn’t the case.

Any brick layer will tell you that there is more to simply putting the bricks on top of each other, especially when you start to think about things such as brick bonds too.

Brick bonds are the pattern which is made depending on how the brick is laid out. In the most part it applies to walls, but it can also apply to paths and patios too. In fact, any other kind of masonry construction.

Not only do brick bonds make a difference to how the wall is going to look, they also have an impact on how strong and durable it is too. So, with this in mind, lets take a look at some of the most common brick bonds and why you might want to use them.

Often known as the running bond, this particular pattern is the most commonly seen in brick laying. This is largely down to the fact that it is the easiest to lay. It is ideal for a variety of walls, include partition walls, sleeper walls and internal division walls too. You cannot use this type of bond if the wall is a stand-alone structural wall, as this requires a greater thickness.

When we talk about headers we mean the shorter face of the brick, which is where the idea of a header bond comes from. When you use this bond the bricks will be in the header course, which means that the overlap will be half the width of the brick. This type of bond will usually be used if the wall is to be one brick thick only.

Another common bond that you are likely to see is the English Bond. This bond will have alternative courses of the header bond and the stretcher bond. The header bond is used centered over the stretcher bond and each alternative row is aligned vertically. In order to break up the pattern, a quoin is used. A quoin is a brick that is cut lengthwise into 2 halves and then used in the corners of the walls. You will usually use the English bond if you want to build a one brick thick wall, but you want it to be incredibly strong. These are just some of the different bonds that can be used in bricklaying. Getting to know each one and figuring out which will be right for your project is a key part of the process. Once you have this right, then you can be sure that you will create a wall that is not only strong, but that looks great too!